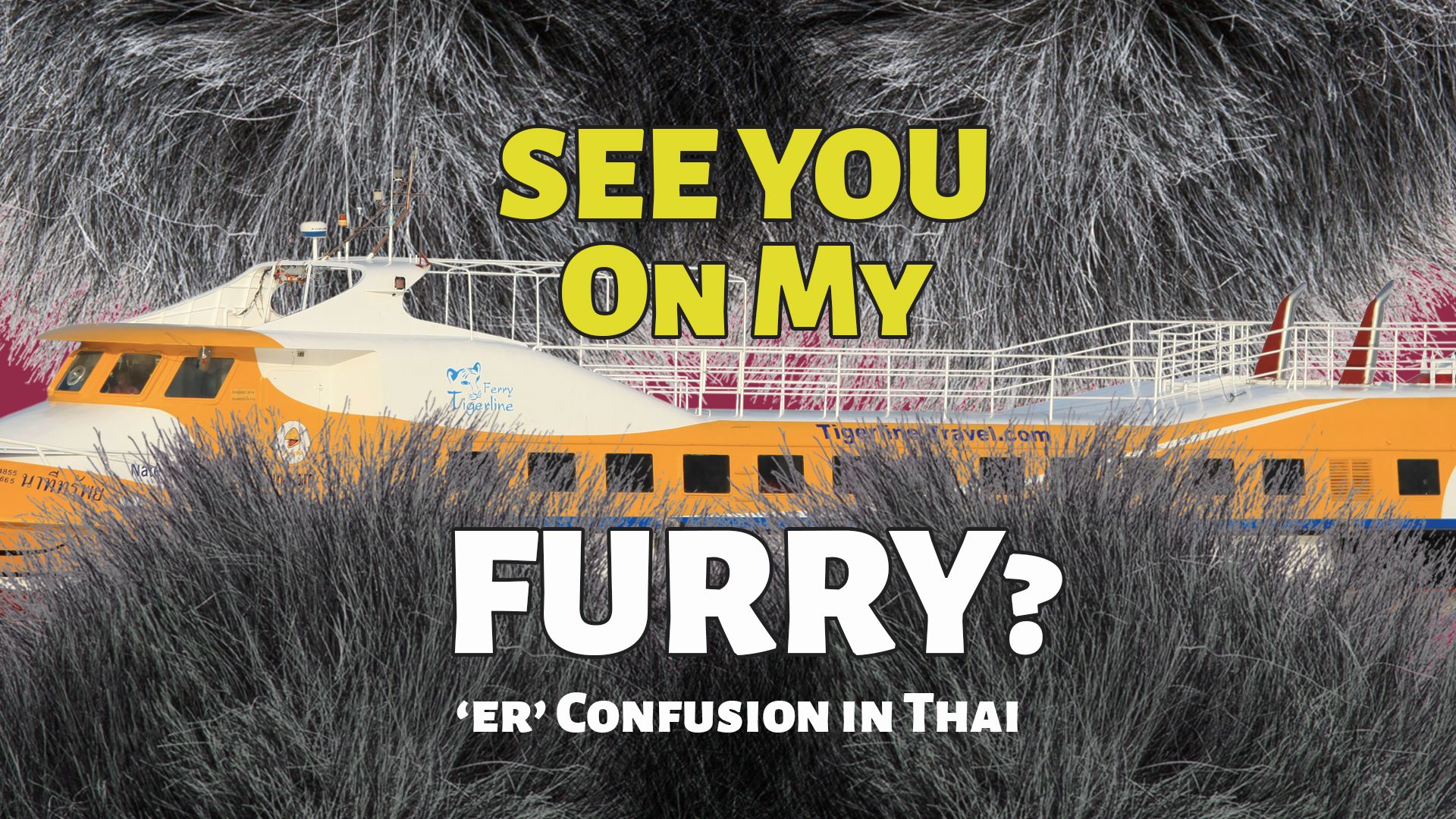 "I'll see you on my furry this evening" - This might sound like the introduction to an 'R'-rated story, but this in fact was the parting sentence that led to a deep state of confusion for an American friend visiting Thailand when he was planning to meet up with a new Thai lady he'd been introduced to by a friend of a friend.

This American friend called me up feeling very perplexed, trying to figure out what a Thai girl that he had been introduced to was trying to say to him over the phone when they were planning to meet each other for the first time in person for coffee. Things can move fast these days, but he suspected that her inviting him to be on her furry was probably not intended to be what initially came to his mind.

Not all ER's are the Same

The misunderstanding came from the fact that whenever a word containing the letters ‘er’ is transliterated from English into Thai, there is an unwritten rule in Tinglish (Thai English), that ‘er’ is the equivalent of the Thai sound เออ /ə/ (sounds like 'ir' in ‘birthday’, or 'er' in ‘her’ and ‘dealer’). The problem is that there are many words in English where ‘er’ doesn’t sound like that at all.

Before we go any further, just so that we can all be on the same page when it comes to sounds, let's use two IPA symbols to differentiate two different 'er' sounds -

Now let's look at the following words in English:

These words are actually spelled in Thai books as:

If you can read Thai, you will see that there is also an artificial 'falling tone' that has been hard-coded into the Thai spelling of these English words ensuring that the mispronunciation is carved in stone.

It turns out that my friends new friend had invited him to meet her on the ferry that she takes across the river each day after work at the Chaophraya river, and she had invited him to meet her there and they'd take the ferry across the river and have a coffee together. Even if she had have looked up the word 'Ferry' from Thai into English in a dictionary, it wouldn't have helped her, as any rendering of it in Thai spelling would have her pronouncing it 'Furry'.  There is actually a way to render the correct pronunciation of these English words into Thai letters.  The words would be written:

… and the word 'Ferry' would be เฟ๊หรี่.

If you can read Thai, you can see that it is even possible to put tones or 'accents' on the right syllables to make it sound much more like a native speaker of English.  Sadly, my revised spelling looks so 'foreign' in Thai - and Thais are so used to seeing the 'Tinglish' version of English words spelled in Thai, that if they did come across the words spelt as my revised words, the spelling conventions would look so foreign that they would probably be ignored or thrown into the 'too hard' basket.

Keep this in mind when you’re speaking both Thai and English in Thailand – next time if you're tearing your hair out when they can't understand you when you order a ‘Cherry Crumble’ or received an ‘Error’ on your computer, remember that the general rule of thumb is ‘er’ makes /ə/ (rhymes with ‘her’) – no exceptions!

About Stuart Jay Raj
Previous Post : Why Are Many Thais Afraid of Gheckos (jingjok)? And other Questions We've Always Wanted to Ask Each Other   Next Post : You're Pronouncing 'D' Wrong- How to Sound Less Like A Foreigner in Thai, Chinese, Vietnamese, Spanish and Javanese