Several months ago, I was brought into a project in a high-end hotel in Bangkok that was a couple of months away from completion. Right now in Thailand, the labour market is flooded and finding internationally minded service staff with sufficient English language skills is not an easy task. In order to ensure that the English level of the staff would be up to par, as well as technical skills and knowledge, the client decided to bring in around 70% of the team from India. The manager was brought in from India and he subsequently was responsible for interviewing and hiring around thirteen other team members from India and Nepal.

All seemed well – until the week before opening where almost the entire Thai contingent of the team resigned. In shock, the management team needed to act quickly and hire more locally engaged staff. They did so, and filled the vacant positions with a combination of Thai and Filipino staff that were already living in Bangkok. As with the first group of Thai team members, within days of opening, the new group of Thais were not happy working with their Indian team members. There was constant friction and fighting occurring between staff – so much so that many of the Thai team members were threatening to resign. What was happening? The Indians that were hired were bright, enthusiastic, had fire in their belly and were eagre to do the best that they could do and hone a career path for themselves from this opportunity. What was it that was causing so much tension with the local team members that drove them to the point of wanting to quit?

From the Horses Mouth

In Thailand, the concepts of political correctness, racism, discrimination and equal opportunities are very different from those same concepts in the west. I was called in to help diagnose what was going on, and facilitate a solution. I had a gut feeling that I knew what was going on, but rather than me telling the Indian team, I decided to do it a little differently. I scheduled a half-day workshop with all of the Indians and Nepalis to discuss what was going on and how we might look at fixing the situation in the workplace. To prepare for the workshop, I put a survey out online and made it available to the Thai public via Facebook. The survey results were collected, translated and I presented the data to the staff during the workshop through several activities, each one building on the last with the goal of deepening their understanding of their Thai team members’ culture and more importantly, deepen their understanding of how Thais perceived who they were.

If You See a Snake and an Indian …

As mentioned previously, Thailand has a very different understanding of political correctness and often blanketing stereotyping terms are used to refer to different groups of people. Sometimes determined by the country of one’s origin, sometimes determined by the colour of one’s skin. While the term used for western, Caucasian foreigners is ‘Farang’ ฝรั่ง, there is another term reserved for non Western, non Asian, non African people. That term is ‘khaek’ แขก. What does ‘khaek’ mean to a Thai? What exactly is a Khaek? You can see from the results that a ‘Khaek’ in the eyes of a Thai can cover anyone from India or the sub-continent, anyone with Indian looking features, all Muslims, Middle Easterners, Malay and Indonesians and subsequently many Southern Thais, possibly Mediterranean looking people and sometimes even people from Africa. There are ‘black’ or ‘dark’ khaek and ‘white’ or ‘light’ Khaek’. Trying to explain that an Indian is not the same as a Pakistani or Nepali or even Malay to many Thais might be futile. In the eyes of many, ‘Khaek is Khaek’. It is harsh. It is very politically incorrect, but it is a reality that must be accepted and worked with for anyone living and working in the kingdom. The following are some of the highlights of the report resulting from the survey. These results are very telling and the Thais didn’t hold back. Through understanding the way that the Thais anticipated the Indian team to be like, and then with those filters in place, understanding how they might react to the team, the Indian or ‘Khaek’ team members would hopefully be able to make some adjustments to make themselves more palatable to with their Thai colleagues.

After presenting the information contained in the below report to the workshop participants gradually through discussion and activities, they accepted it and took it all on board with a surprisingly positive attitude. Many of the issues had to do with hygiene, deodorant, the tendency to argue and in Thais’ point of view, cause others to lose face. Where Thais might have a tendency to avoid conflict, it seemed to the Thais that the Indians actually proactively sought conflict. Aside from discussing cultural issues, in the workshop we also covered several language points and I highlighted similarities between the Indic language systems and Thai and showed some shortcuts that the Indians could use to accelerate their learning of Thai. While many of the opinions expressed in the results that I have included below are stereotypes, the fact is that in Thailand, many of these stereotypes are programmed into Thais from an early age and many will express these ‘opinions’ with knee-jerk fervor even if they personally may not have had such experiences with Khaek. I went back the week after the workshop and spoke with several of the Thai team members at different levels of the organization and it seems that there were real changes that had taken place. They said that the Indian team members were much more pleasant, didn’t have body odour anymore and they were pleasantly surprised when the Indians would greet them each day in Thai and even ‘Wai’, which is the Thai style bow with clasped hands in front of the body.

While a nice notion, sometimes it just may not be practical to apply western principles of political correctness and compliance in local workplaces across Asia. Both the corporate and national cultures are very different and sometimes things need to be communicated very bluntly before a company incurs too much loss. Facing the reality and accepting that as foreigners, you can’t change something even though you think it might not be correct is the first step in building a much more harmonious team. I have left the online survey open and can be accessed here. To be fair, it is not just Indians that cop the brunt of Thais’ ire from time to time. There are several groups of people where their collective name has embedded within it deep seated emotions, both positive and negative. I am currently running a similar survey for a much larger group – ‘Farang’ ฝรั่ง. If you are Thai, you can access the survey here and add your response. I will be sharing the results of this survey once we have enough results in. Below are the survey results for for the ‘Khaek’ (Indian) survey. I still have that survey open online and will update it when a significant number of new entries come in. Thais can access the ‘Khaek’ survey here.

The survey questions were as follows:

These results are taken from 25 respondents. The figures would change as the respondent pool grows, however looking at the results, the important facets of the term ‘Khaek’ are sufficiently revealed. Please note that the views represented in this report are not those of the report author.

Question 1 – What does the term ‘Khaek’ แขก mean to you? 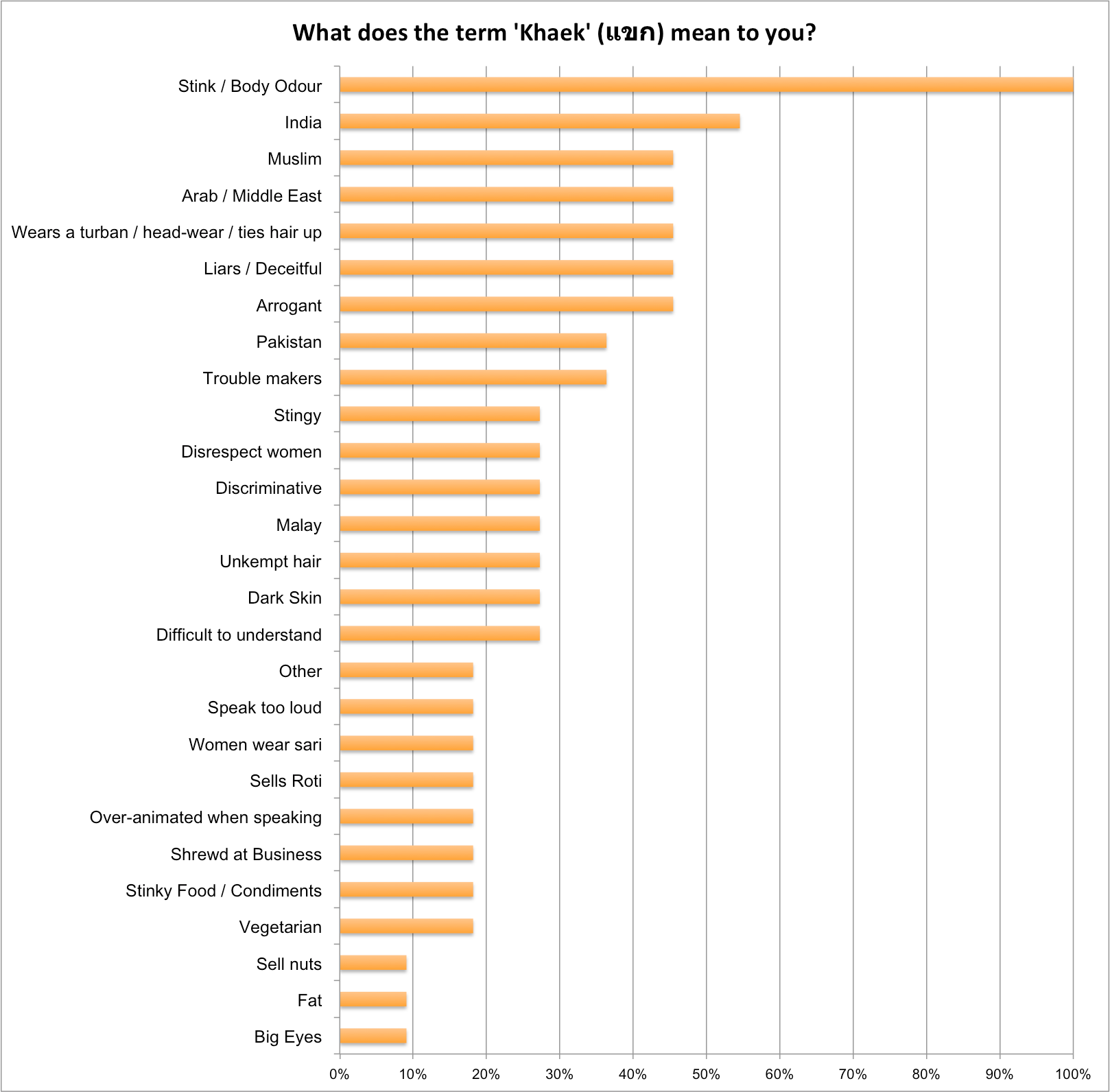 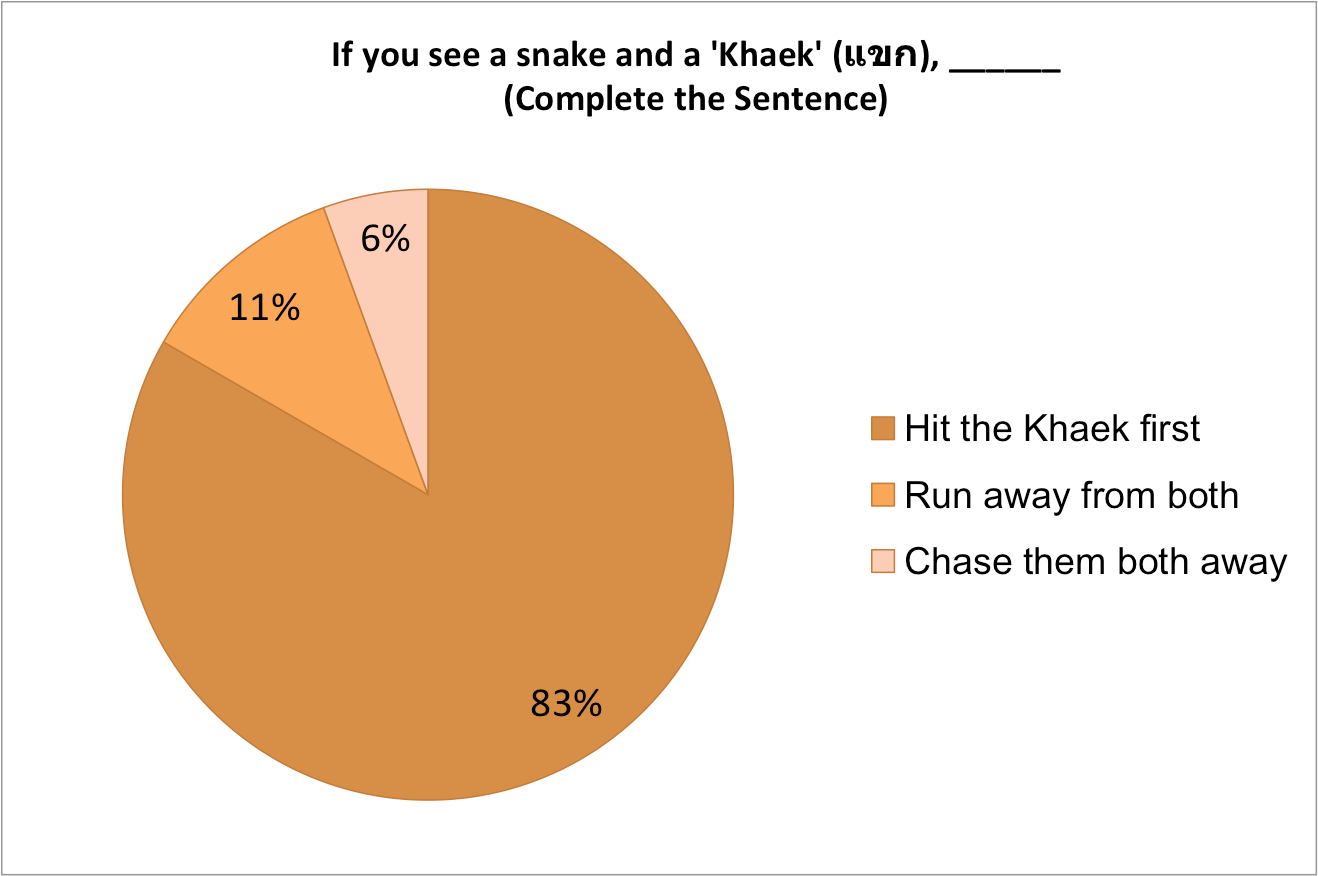 Question 3 – What countries from this list would you associate with the meaning of ‘Khaek’ (แขก)? 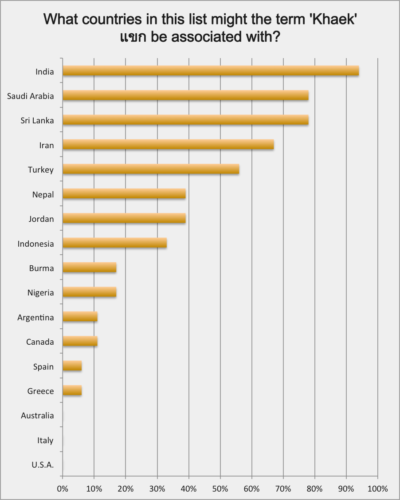 Question Four – What advice do you have for any foreigners coming to work with Thais?

(Please note that these responses are not in any particular order).

Stuart Jay Raj
Linguist, author, cross-cultural business strategist and facilitator - competent to native in over 15 languages inc. Chinese langs, Thai, Bahasa, Spanish, Sanskrit and Danish.
RSS
More posts by Stuart Jay Raj.
How Safe is it to Travel in Asia
Yesterday a man held up traffic in downtown Bangkok holding a knife and releasing a bag of snakes.  Last week, my wife Wimintra arrived home from Sri Lanka just a day before the tragic events that rolled out in Colombo.  After a wave of messages coming in from friends and
Stuart Jay Raj Fails Spelling Test Dismally and Lisa Blackpink
This past week I had the honour and pleasure of being a guest on the wildly successful Youtube 'Picnicly' show.  I realised my age as I was tested on some 'pop culture' of the new generation in this part of the world.  It was the first time I'd heard about